Our Office is closed for Christmas and New Year 2020 Holiday. We will be back to business on January 2nd 2020.

On behalf of our Management we wish you a Merry Christmas and Happy New Year 2020.

Coal exports from Indonesia will be restrained this year, which could frustrate a plan by the government to ease a burgeoning trade deficit while keeping prices elevated, according to an industry group.

Producers in the world’s largest shipper face an order backlog of 18 months as they aren’t able to get hold of additional mining equipment, Pandu Sjahrir, chairman of the Indonesian Coal Mining Association, said in an interview in Jakarta. The slow rampup in supply will probably keep coal prices buttressed at about $100 a metric ton through the end of next year, he said.
“Supply restriction is still quite real,” Sjahrir, who’s also finance director at miner PT Toba Bara Sejahtra, said on Monday. “It’ll be the end of 2019 before they can fulfill some of their orders today.”

That’s bad news for President Joko Widodo’s government, which is trying to rein in a current-account deficit and bolster the currency that’s tumbled to the weakest level since the 1997-98 Asian financial crisis. A rally in coal prices and the abundant reserves in Indonesia makes the commodity an ideal target in the government’s drive to boost exports and shore up dollar earnings. 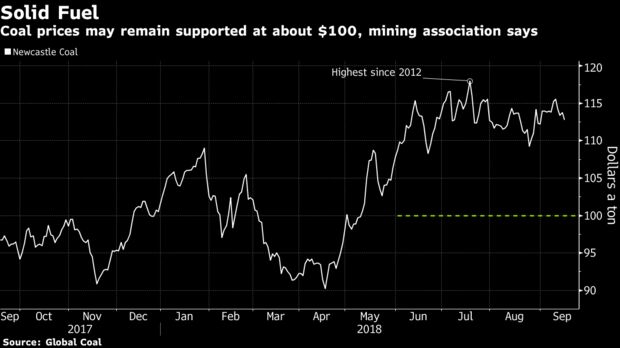 Major coal producers and contractors in Indonesia are having difficulties accessing additional mining equipment, Shirley Zhang, an analyst at Wood Mackenzie Ltd., said in an emailed note Monday. “Upside for Indonesian coal exports from their current level is limited” in the near term, she said.

Asia-Pacific benchmark Newcastle prices have rallied about 10 percent this year and are averaging $105, the highest level since 2011, amid resilient demand in China, the world’s largest user. The prospects for tighter supply to support prices at about $100 have also been flagged by Australia miner New Hope Corp.

The Indonesian government approved an extra 22 million tons of coal output for the rest of the year, about a fifth of the 100 million tons it was open to endorsing. While an increase of about 30 million tons in the next six months might be possible, according to Sjahrir, that would still be a relatively small amount compared with overall output.

Indonesia produced 461 million tons in 2017 and shipped about 389 million, from 456.2 million tons and 370 million respectively a year earlier, according to data from BP Statistical Review and Bank Indonesia compiled by Bloomberg.